Mr. Darcy is the ‘ideal man’ according to a new survey conducted by Ireland’s biggest book club bordgaisenergybookclub.ie.  To mark Valentine’s Day, the survey sought to reveal the favourite love stories and characters of all time among Irish booklovers.  Over half of those polled (55%) voted Mr. Darcy from Pride and Prejudice as their favourite male character in a romance novel, Heathcliff from Wuthering Heights came in second (15%) and Rhett Butler from Gone with the Wind followed as a close third (14%).

Pride and Prejudice was voted as the all-time favourite classic love story with a whopping 49% of respondents’ number one votes. However, only 17% of respondents chose it as their favourite movie so it appears the love for the book outweighed the love for the movie – despite that famous lake scene portrayed by Colin Firth. Gone with the Wind and Wuthering Heights were voted as the second and third favourite classic love stories with 20% and 19% of Irish readers’ votes.

When asked to choose their favourite female character in a romance novel, Irish literary lovers chose Jane Eyre with 28% of the vote.  Scarlett O’Hara from Gone with the Wind and Emma from One Day were also among the favourites with 27% and 24% of the votes respectively.

The results for modern love stories are not quite as unanimous, both One Day by David Nicholls and Atonement by Ian McEwan were voted joint favourites with each receiving 24% of respondents’ votes. These were followed by The Bridges of Madison County (20%), Twilight (18%) and Irish best-seller, PS I Love You (17%).

*This survey was carried out amongst 105 adults

You can try a scuba dive with  Atlantic Diving School based in Co. Clare, under the watchful eye of Chris Healy who recently broke a World Record

Discover Scuba diving is an experience designed for those who want to test the waters and who have a little adventure in their blood.

You will be shown the basic safety procedures for an enjoyable scuba dive under the watchful eye of a Qualified PADI instructor.

Please be aware that PADI Discover Scuba diving is not a diving certification but an introduction to diving in a safe environment. 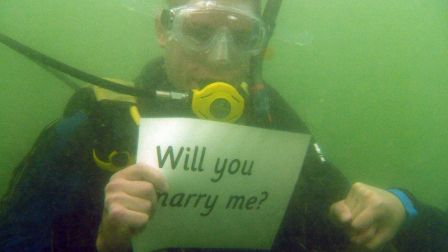 If you’re feeling confident enough why not propose marriage underwater? Bring a little sign with you or have the instructor carry it saying ‘Will You Marry Me?’. You could even bring the ring if you’re feeling brave enough. Tie a piece of string to it to ensure it’s not lost in the seaweed or sand though! You could also use a temporary ring, especially if wearing dive gloves. You could also ask Chris (or whatever dive instructor is going to be with you) to hide the ring in the box in spot where you can ‘find’ it on the dive. Most dive spots have well recognised landmarks by those who frequently dive them, so ‘finding’ the box shouldn’t be any trouble.

To make your reservation

For anyone planning to propose marriage this coming Valentines Weekend or maybe just would like a nice romantic walk in the open countryside under the light of the moon but with the safety of group of other walkers, a nice service is available through www.wildernessfitness.ie

We can’t bring you to Paris, but we can definitely bring the romance to you.
Picture this, your partner and you on a romantic moonlight stroll through the beautiful Valley of Glenmalure in the heart of Co. Wicklow.
This Valentines weekend, strike all the right cords with your lover in the beautiful garden of Ireland. You both can relax while the team of cupids at Wilderness Fitness take care of the romance for you. Just show up with your loved one and we will do the rest.

The emphasis will be on enjoyment for you, and as such the walking route chosen is a moderate to easy in exertion levels.
It will take about 2 or 3 hours to complete and we promise to have you back in time to enjoy a drink by the fire!

So what are you waiting for?
Glenmalure is waiting to seduce!